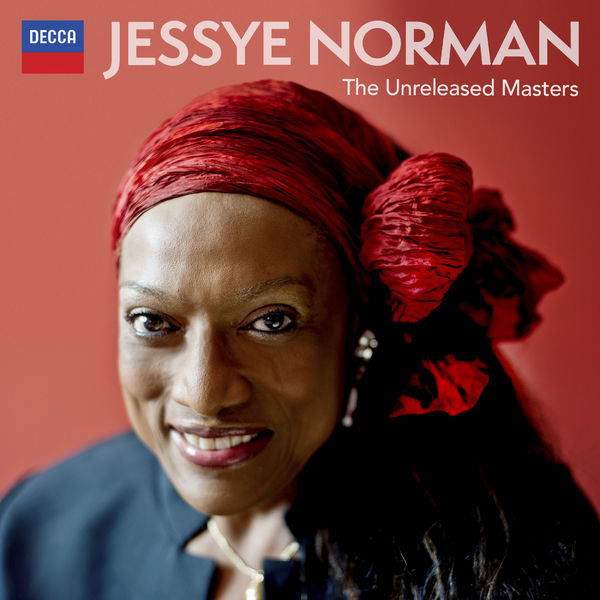 An unrivalled and towering figure on stage and in the studio, Jessye Norman was unquestionably one of the exceptional sopranos of all time. Her death in September 2019, which left the world bereft of an unmistakably radiant light, saw legions of fans including celebrities, civil rights and arts world leaders, sharing the impact she made on their lives, and reinvigorated discussion in articles, blogs and fan groups around ‘unreleased recordings’. With the support of her family and estate, Decca proudly presents a collection of six unreleased Philips recordings of works by Britten, Haydn, Berlioz, R. Strauss & Wagner.

It was Ms Norman’s perfectionism, the feeling that the music was often better than any performer could do justice to, that caused her to withhold the recordings which now see the light of day. Now lovingly restored and remastered from the original tapes, Jessye’s countless admirers, who have long yearned for these, can hear these important documents of one of the greatest singers ever recorded. All the works in this stunning new collection are essentially love poems in one form or another, and constitute Jessye Norman’s final “Abschied” to the world of recording. The release includes a 68-page booklet with new essays (in English/French/German) by Cyrus Meher-Homji, Costa Pilavachi, and George Hall, sung-texts in original language with English translations, and many beautiful photographs.

The first disc in this set, recorded in 1998, represents an incomplete but invaluable studio recording of Wagner’s Tristan und Isolde with Kurt Masur and the Leipzig Gewandhausorchester and tenors Thomas Moser (Tristan) and a young Ian Bostridge (The Young Seaman). For various reasons, this was never completed. However, what we do have is just over 66 minutes of Highlights including most of Isolde’s music and Ms Norman also singing the role of Brangäne (perhaps the only time one performer has sung both roles on a studio recording). No other studio recording of her singing Isolde exists (with the exception of the “Liebestod” with Colin Davis, Herbert von Karajan and Klaus Tennstedt).

Disc Two, couples music synonymous with Ms Norman, Strauss’ Four Last Songs, recorded in May 1989 (her second recording of this repertoire), with Wagner’s Wesendonck-Lieder, recorded in November 1992. Both were recorded ‘live” with the Berliner Philharmoniker and James Levine.

The final disc presents a sensational programme, tailor-made for the great diva. Recorded at concerts in February 1994 with the Boston Symphony Orchestra and Seiji Ozawa, the three queens represented in the programme are Britten’s Phaedra, Haydn’s Berenice and Berlioz’s Clêopatre. A decade or so after the recording, approval was given for the release of the Haydn and the Britten, but Norman felt that the audio mix for the Berlioz was less than ideal. This has now been satisfactorily remixed and remastered for release.